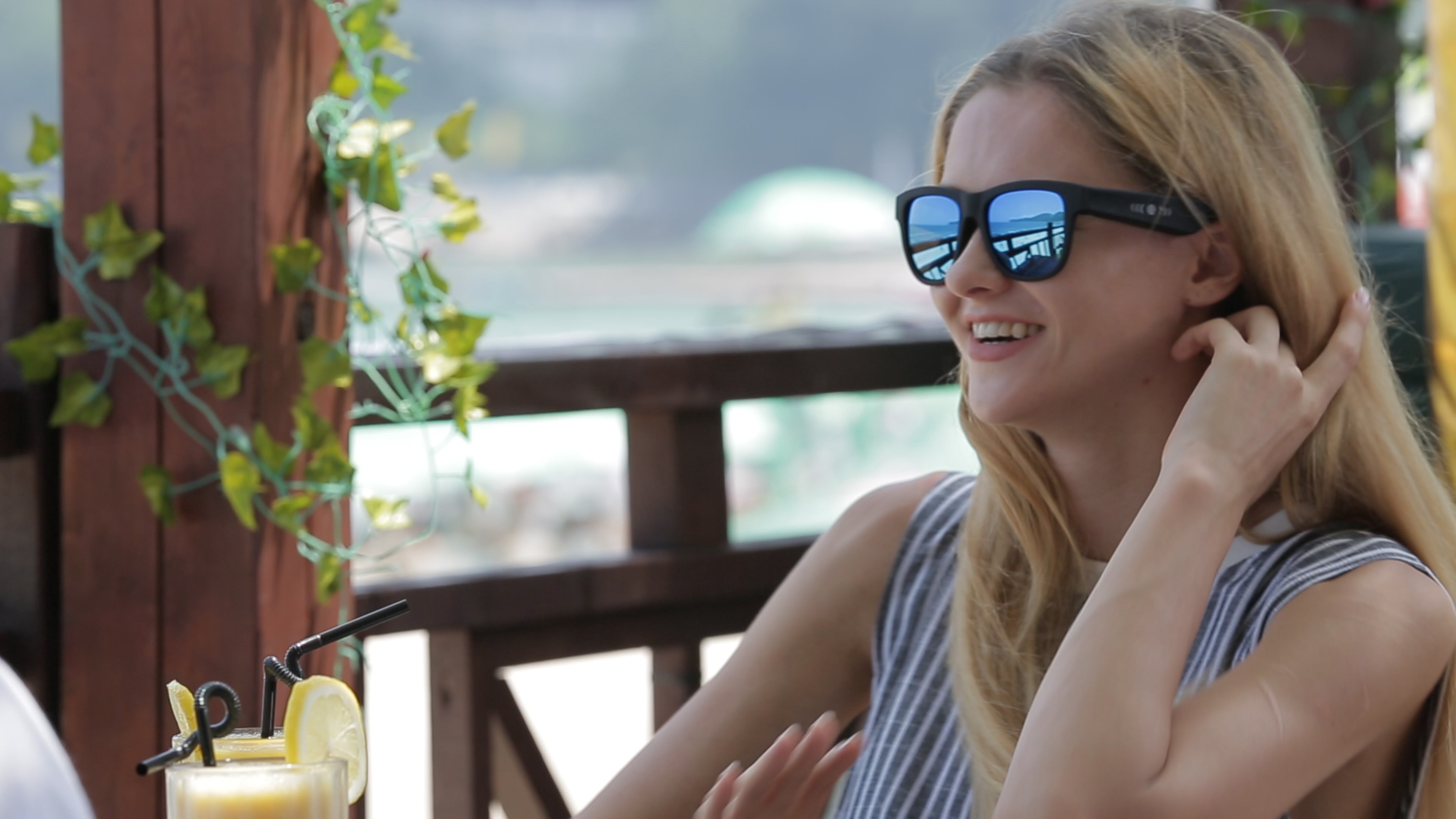 Sunglasses, spectacles with tinted lenses, were originally a purely practical safety device, designed to protect the eyes from excess sun and glare. In the twentieth century, however, they became an important fashion accessory, whose use and meaning continues to evolve.

Tinted spectacles were made in Europe as early as the seventeenth century, but were used because they were thought to be beneficial to the eyes, or to conceal the eyes of the blind, and were not “sunglasses” in the modern sense. The need for eyewear to protect the eyes against sun and glare first became apparent in the mid-nineteenth century, when early polar explorers and high-altitude mountaineers experienced snow-blindness, and spectacles and goggles with tinted lenses were developed, some with side shields of glass or leather. (The Inuit used slit snow-goggles of wood or bone, which covered the eyes.) As increasing numbers of Europeans and Americans were exposed to the strong sun of tropical and equatorial colonies and territories, dark glasses began to be worn there as well.

Sunglasses became more widely available in the 1880s, when bathing and holidays by the sea became popular with the general public; by 1900, inexpensive tinted glasses (now known as “sun glasses”) were sold by seaside vendors, and worn by English tourists in Egypt to reduce the desert glare. The invention of the automobile, and the popularity of motoring as a fashionable leisure activity, also brought protective eyewear into common use, and tinted motoring goggles were available by the 1910s.

In the 1920s, sunglasses were occasionally worn for active outdoor sports such as golf and tennis, and for the newly fashionable activity of sunbathing. They did not truly enter the fashion sphere, however, until the early 1930s, when Hollywood stars such as Bette Davis and Marlene Dietrich were photographed wearing them between takes on the set, attending tennis matches and horse races, or trying to appear in public incognito. Sunglasses began to symbolize the glamour of life in Hollywood, but there was little variation in style at first; most 1930s sunglasses, for both men and women, had round, flat glass lenses, with narrow celluloid frames. The only fashion decision lay in choosing the color of the frames; these were usually translucent and in colors close to tortoiseshell, but opaque white frames were also considered chic.

Toward the end of the decade, the demand for sunglasses, and the variety of available styles, increased dramatically; in 1938 the number of pairs sold went almost overnight from the tens of thousands into the millions, and manufacturers rushed to come up with new colors and styles. Sunglasses began to be shown with street clothes, in addition to ski and beach wear, and Vogue suggested styles, such as the white pair featured on the cover of the 1 August 1939 issue, with “wide rims and earpieces, giving the approved ‘goggly’ appearance” (p. 81). Sunglasses, being less expensive than prescription eye-wear, and associated with vacation and leisure activities, were quickly embraced as a “fun” fashion accessory, and even bizarre novelty styles soon found a market.

The quality of sunglasses also improved in the 1930s, and both of the major U.S. optical companies introduced lines of sunglasses with optical glass lenses (ground and polished like prescription eyeglasses). Taking advantage of the public appeal of daring aviators such as Charles Lindbergh and Amelia Earhart, Bausch & Lomb introduced the metal-framed “Anti-Glare Aviator” sunglasses in 1936, and the following year gave them the more appealing brand name “Ray-Ban” (to emphasize protection from harmful infra-red and ultraviolet rays). American Optical teamed up with the Polaroid Corporation in 1938 to produce the first polarized sunglasses, with glass lenses incorporating a polarizing film. World War II brought new popularity to military-style sunglasses, especially Ray-Ban Aviators (worn by Navy pilots and General Douglas MacArthur), and lent them the air of toughness and competence that has kept the style popular ever since.

To See and Be Seen

After the war, the craze for sunglasses quickly resumed in full force. Advertisements began to emphasize smart styling over eye protection, and distinct men’s and women’s styles were developed. Sunglasses could now be purchased in drug, variety, and department stores, at prices from 25 cents to 25 dollars. With growing competition, established manufacturers increased their advertising and diversified; American Optical launched the “Cool-Ray” trademark, and in 1948 introduced inexpensive Polaroid plastic lenses. It became fashionable to have multiple pairs for sport, everyday, and even evening wear, and in colors to match particular outfits. Eyeglass wearers could have sunglasses made with their prescription, or choose from a variety of clip-on styles.

In the 1950s, to boost sales, sunglass manufacturers began coming out with new models every year, following the lead of the automobile industry. As with eyeglasses, the harlequin, or “cat-eye,” shape was the dominant style for women, but sunglasses took the style to much more fanciful extremes. Sunglasses were made with carved, laminated frames shaped like flames, flowers, and butterflies, studded with rhinestones, imitating unlikely materials like bamboo, or trimmed with false “eyelashes” of raffia. Even relatively conservative frames were produced in bold and unusual shapes, colors, and patterns, and were given model names such as “Torrid,” “Vivacious,” and “Peekini.” For men, new styles with clean lines and heavy plastic frames were popular, the most famous being the Ray-Ban “Wayfarer,” introduced in 1952.

Whatever the frame style, sunglasses were also worn because of the air of mystery they imparted to the wearer. One could still hope to be mistaken for a celebrity such as Grace Kelly or Rita Hayworth, but sunglasses also offered, as a 1948 ad for the first mirrored sunglasses put it, “the wonderful fun of looking out at a world that can’t see you” (Saks 34th St. advertisement for “Mirro-Lens” sunglasses, New York Times, 28 March 1948, p. 30). Dark “shades” contributed considerably to the “cool” of bebop jazz musicians and beatniks, who wore them even in dark nightclubs. Once the fad for wearing sunglasses at night caught on, however, it became harder to tell the “hip” from the “square”; as one observer told the New York Times in 1964, “If you’re really ‘in’ you wouldn’t be caught dead wearing them indoors or at night because you’d look like someone who is ‘out’ but is trying to look ‘in'” (Warren, p. 66).

By the early 1960s, sunglasses were more popular than ever, with an estimated 50 million pairs per year sold in the United States by 1963. They were also available in more styles than ever before; Ray-Ban advertised “the see and be-seen sunglasses, [in] all kinds of designs—bold, shy, classic, crazy, round, oval, square, oriental” (Evans, p. 17). President Kennedy often appeared in public wearing sunglasses, and Jacqueline Kennedy started a fad for wraparound sunglasses when she began wearing them in 1962. Similar sleek, futuristic styles from Europe inspired Polaroid to launch the French-sounding C’Bon brand,

Featuring “the St. Tropez look.” Sunglass advertising was also taken to new and imaginative heights; the famous “Who’s that behind those Foster Grants?” campaign of the mid-1960s, in which celebrities such as Vanessa Red-grave and Peter Sellers were shown transformed into a series of exotic characters by Foster Grant sunglasses, were highly successful in promoting the power of sunglasses to “subtly alter the personality,” (Foster Grant advertisement, 1964, available from www.fostergrant.com) and release the wearer’s inner tycoon or femme fatale.

In 1965, André Courrèges’s sunglasses with solid white lenses and viewing slits were the first designer sunglasses to receive wide attention. They soon inspired other space-age designs such as Sea-and-Ski’s “Boywatcher,” a seamless slit goggle that could also be worn as a headband, and a variety of alien-looking “bug-eye” styles, with frames in day-glo colors or shiny chrome. Socalled “granny glasses” were also popular, as were large round wire-rims with lenses in pale psychedelic tints. Enormous round dark glasses, such as those designed by Emilio Pucci, were another style favored by celebrities late in the decade.

In the 1970s, the trend toward oversized designer frames continued. In keeping with the fashionable “natural” look, lenses became paler, with gradient tints in the same rosy shades fashionable for eye makeup. The eyes were now visible, and in the April 1977 issue of Vogue sunglasses were declared “the new cosmetic” (p. 146). As the decade progressed, expensive sunglasses by designers such as Pierre Cardin and Givenchy became sought-after status symbols, and were frequently worn on top of the head like a headband when not in use. Sporty mirrored styles were also popular, especially for men.

In the early 1980s, the trend to harder-edged styles in black and bright colors coincided with the revival of Ray-Ban’s Wayfarer style, which was given a high profile by the Blues Brothers, the 1983 film Risky Business, and the TV series Miami Vice. Heavy black sunglasses with conspicuous designer logos harmonized with the era’s penchant for “power dressing,” and similar flashy styles were reproduced for every price range. Oddly shaped, futuristic “new wave” styles were another trend, and the mirrored aviator style was revived once again by the 1986 film Top Gun. High-tech “performance” styles designed specifically for outdoor sports, by makers such as Vuarnet and Revo, first became popular in the 1980s, and started a craze for iridescent mirrored lenses.

In the late 1980s and 1990s, in sunglasses as in eyeglasses, minimalism, industrial design, and revivals of earlier styles were the dominant themes. Designer logos fell out of favor early in the decade, and pared-down fashion and hairstyles required clean-lined, sleek frames with meticulous detailing. New sports styles by Oakley, so close-fitting that they seemed to merge with the face, were popularized by athletes such as Michael Jordan and Olympic speed-skater Bonnie Blair. These high-tech glasses, using novel materials such as magnesium alloy and gold iridium, were highly influential, and began to blur the line between sports and fashion eyewear.

At the turn of the century, sunglasses are more important than ever as an individual fashion statement, but there is no dominant style, unless it is “freedom of choice.” After a series of “retro” revivals, and trends started by musical celebrities, avant-garde designers, athletes such as Lance Armstrong, the NASCAR circuit, and films such as The Matrix, the sunglass market has fractured into many specialized niches. An unprecedented variety of designer collections is available to choose from in the early 2000s, and larger makers such as Ray-Ban feature several smaller “themed” collections, each with its own distinct aesthetic. Over the course of the twentieth century, sunglasses have become an essential part of the fashion and image-making vocabulary, and they seem likely to continue to fill this role in the future.

you have been successfully subscribed, Thank you for joining the awesome EyeWear Depot tribe.

The Best Sunglasses for your face shape

No products in the cart.